Like the title of this post states this past weekend we had our Crew screening on Panda 2. It was incredible. The studio rented out the Gibson Amphitheater at Universal to screen the film and then immediately after we had our Wrap Party on the Universal lot. I even got to see Jeffrey and take a picture. We were also treated with a surprise visit by Jack Black who thanked us all for our hard work, which, as he said, he would take full credit for in every interview. He's a very sweet fun guy and we could tell he was genuinely proud to be part of this film, as we all are. 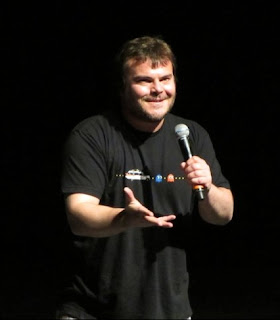 Now, having seen the whole film completely finished I have to say, I'm soooo proud to have been a part of it. I would even go as far as to say that I found it to be even better than the first! And I'm a HUGE fan of the first film. There are tons of laughs, action, and heartfelt moments all over this film. There's something for the whole family. I've already seen the completed film twice and I can't wait to see it again this Friday.

On a side note, in addition to all the fun events with the screening, I also got to be a part of this films press marketing. They asked me to do some phone and on camera interviews for this coming week about my experience on the film. Hopefully I'll have more to report this week and maybe some links to video's that I can post here. The whole experience was extremely fun and exciting especially when I get to talk about such an amazing film.

Rebecca Perez Stodolny
Welcome to my blog where I’ll update it with current information which I hope in someway inspires you like it does me. Enjoy! I’ve always been fascinated by animation, films and moviemaking. Now I get to do it for a living. I’m currently an animator at ReelFX Animation and have worked on a wide variety of films such as "How to Train Your Dragon", "Kung Fu Panda 2", "Megamind", "Cloudy with a Chance of Meatballs", and "Disney's Bolt".